...I wonder if they would help? If not there are plenty of spectacles here, read on...
Friday I had the day off to practice looking through the new bins. It was wet so I didn't bother much - there's dedication for you! I did find a single Bar-tailed Godwit outside the shop though.
Saturday was a pleasant day with no rain till the evening. We started well with a good showing of Mountain Hares and as we moved to the next location a cracking male Hen Harrier flew straight in front of us. Naturally by the time I'd stopped and got the camera out it was a bit distant but here is the shot anyway - look at that blue sky!

There were regular sighting of Common Buzzard through the morning but at lunchtime things went strangely quiet. We managed to find a distant Golden Eagle but the skies were empty after that. I had a real close encounter with an Adder as I tried to relocate one that had slithered off. It was a moment of madness that won't happen again! I moved a piece of Bog Myrtle, not really expecting to find anything, only to find the Adder's head pointing straight at me - luckily I must have been just out of range! We moved on to view the Common Seals and managed to get a couple of them porpoising. Three Greenshank are still in the locality but they can be hard to find, at times, so it was nice to get them on the list. The mother and cub Otters put on a good display as I searched the ridges for big birds - still no buzzards around either. You could feel the weather was changing even though it was still pleasant. We did get cracking views of a female Peregrine that soared around for a while before going into a stoop that brought it straight over the top of us - classic. We finished the day off trying to locate a WT Eagle - all the favourite spots had been checked and we spent a lot of time scanning ridges but it was all to no avail. That's got to be the first time this year I've not located one - very strange.
Sunday started with a bit of rain but it cleared up soon enough. With little wind the dreaded midge was having a go but it also meant the Hares were easy to get too. A good gathering of Ravens indicated the presence of a sheep carcass and three Common Buzzard provided a bit of sport as we tried to photograph them. 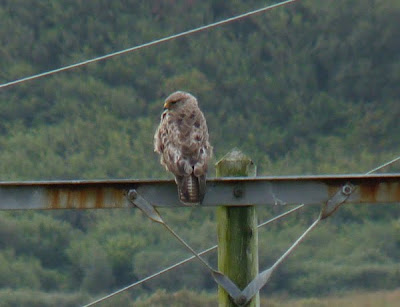 Plenty of Meadow Pipit and Pied Wagtails around but very little else so a family group of Goldfinches were pleasing to get good views of.

We stopped at a gate where quite a few small birds were moving around and a pleasing haul of Greenfinch, Linnet, Blue Tit, Long-tailed Tit and a Wren ensued. Next stop provided views of a single Golden Eagle and a few Manx Shearwater passing by amongst the masses of Kittiwake. Common Terns are still hanging around too but a surprising lack of Skuas at the moment - maybe they'll come yet. The main request for the day was for Golden Eagle so when we finally got a close one it was worth the effort....

....they don't get much better than this but the photos don't do the bird justice - stunner.

We got a distant view of WT Eagle sitting on a ridge so there was some hope of getting a closer view if it stayed put. The weather started to change as the wind switched direction. The lochs were still pretty much flat calm but there was nothing moving out there. The birds and beasts really do know when there is going to be change. This Buzzard was looking for somewhere to sit out the front that was threatening to spoil the day. 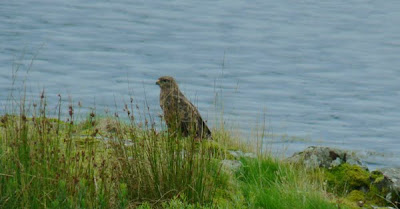 We couldn't find any sign of the WT Eagle on the ridge and no sign of Otters. The cloud base suddenly dropped and the ridges started to disappear - WTE was starting to look desperate. We stopped in what was hopefully a good location and had a cuppa. Five minutes later a WT cleared the ridge and was followed soon after by another and the rain was starting to fall. Off again for the Otter hunt, pleased with the haul up to now, but the visibility was disappearing. You could hardly see the other side of the loch but the two little heads popping up gave their presence away. We moved to a better position as the Otters moved further away so we got good views before they hauled out and disappeared behind the rocks. We called it a day as the visibility disappeared and drew a curtain on the day!
Posted by Bryan Rains at 09:41