This is my hundredth post on the blog. I only started the blog to see how it easy it was and was instantly hooked. It's great to see that people read this on a regular basis and it's appreciated. I'm not as prolific as some bloggers but most of the incentive comes from getting a few photos to 'pretty it up'. It was never going to be filled with quality images as I don't have the equipment for that but getting any images at all has proved to be difficult at times. I'm still enjoying it so long may it continue!
I was hoping to get one of those spectacular opportunities to jazz this post up but it hasn't happened - no surprises there then! Tuesday was wet start and thoughts of damage limitation but we got off to a good start with 4 Bar-tailed Godwits, 4 Sanderling and a good number of Dunlin and Ringed Plover. Barwits and Sanderling are always a good find up here as we only get the passage birds and they tend not to linger too long. We proceeded to get wetter but there was signs of it clearing. An Otter in the choppy water was a good find but with the rain lashing down we didn't watch it for long. Miraculously the weather cleared and we could see the ridges so the chance of Golden Eagle went from 'not a chance' to 'it's got be a dead cert now'. We bagged another couple of Otters before locating the two adult WT Eagles sitting side by side on a branch. We headed further up the glen and immediately picked up two Golden Eagle in flight. It's nice to get the lucky breaks with the weather!
Wednesday was a continuation of the showery conditions. I spent a bit of time checking out the wader situation on Loch Beg and located two Bar-tailed Godwits. I picked them up on call as they flew in but they didn't hang around for long. I had the day off to take delivery of some, well needed, new equipment. Wednesday evening I found a moth in the passageway of the pub so I took a photo or two and here is the result. Not the best and I can't find it my books. There are a few that it looks like but nothing definite - feel free to help me out. Is there a particular way of narrowing things down? Do I need to buy an expensive guide to Moths or should I just leave them as Moth sp.? 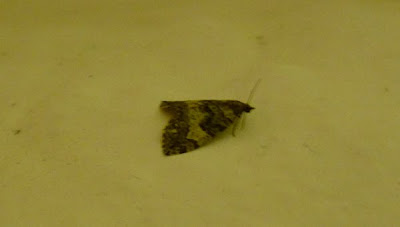 Thursday - wet! With new bins and Postie on board I was hoping for a good day but the weather had other ideas. It was clear skies on Wednesday evening so most of the waders that had been hanging around took the opportunity to move on. We did get 4 Dunlin in flight and a few Redshank that wouldn't stand still and the Mountain Hares were obliging enough. There wasn't a great deal of wind and the midges were out in force. The heavens opened, we got wet, the windows steamed up and we laughed a lot at our great misfortune. The forecast said it was going to rain harder in the afternoon. The forecast was wrong for once. The rain slackened off and the midge battle began. We located an Otter and spent a lot of the time pacing up and down the road with occasional watching of the mustelid before we admitted defeat to the mighty midge. The next stop was much the same with Common Tern and RT Diver being the highlights before we were driven off. We took a chance on looking for the Adders as the sun was starting to poke through but we had no luck and didn't have time to wait around. A Red Deer hind with a calf was a nice spot and a cloud of corvids lifting from behind a distant ridge bagged us our first Golden Eagle of the day. Next on the hit list was a male WT Eagle sitting on the reef being mobbed by GBB Gull. The eagle was in full voice obviously pretty upset by the attentions of the gull. I got the camera out to capture the spectacle - fired off a few shots and gave up, it was too far away. As I put the camera away I noticed it was on the macro setting - doh!

I gave it another go on the right setting and it didn't make any difference at all so not doh! after all. It was just too far away.

The WT eventually flew off up the loch and we watched it go. It was heading straight for a flock of Eider. The Eagle just cruised up to the Eider then dropped to about a foot of the surface - we waited with baited breath - the feet came down and there was an almighty splash as the Eiders dived. The Eagle just carried on up the loch, probably laughing at the scare it had given the Eiders - quality viewing though. Another brief view of an Otter (picked up by Postie) just before lunch was heading in the wrong direction so we let it go. Fed and watered we headed off in search of better views of Golden Eagle. No sooner said than done! Two big birds in the sky turned out to be the juv WT Eagle and a Golden Eagle together - a great performance that ended with the WT Eagle coming in for a closer look. Another Otter further up the loch with another Golden Eagle behind us meant you didn't know where to look. The Goldie got most of the attention though. A short drive up the glen, out of the motor, bins up, a quick scan......another Golden Eagle.....no, two Golden Eagle and then it was 3!! Stunning. We left the Goldies to watch a Kestrel hovering over the ridge - you'll not hear that very often! A quick cuppa and we were retracing our route. We bagged another good view of Golden Eagle as we scanned the hillsides for something new to look at and then the rain started again. We'd had a good day and we were happy with what we'd seen so we headed for home. One of the best sightings of the day was waiting just round a corner though. I caught a flash of something out of the corner of my eye but it was seen better by one of the guests who said it looked like a small bird of prey. It had landed just out of sight and as we drove on it came flashing in front of us - a Merlin. It's not often you get to see them on the island so it's always an exciting bird to see. It disappeared out of view so we moved forward and scanned the area to see if it had perched up again in the rain. Postie to the rescue again - 'I've got it' he says - quality. I was encouraged to get out in the blustery rain to get a shot for posterity.... 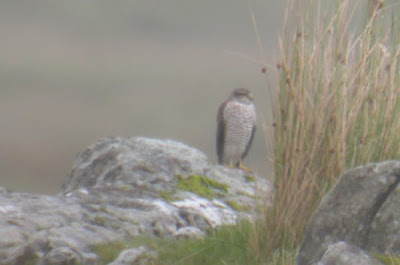 Congrats on the ton. Here's to the next one!

Well done Bryan on producing 100 blogs. As a regular reader they just get better and better. I thoroughly enjoyed the day out with you on 16th June and managed some good photos of the WTE during the rest of the week. Hope to make it back in 2010. Like the photo of the Merlin .. Keep up the good work.

Quality stuff mate, many more to come we hope. How else would I know whats going on.

I was there! Never thought I'd say "oh no, not another golden eagle" they were nearly as common as the herons! A magical day, particularly the merlin; thanks Bryan.

Thanks again for all the comments and I hope you all keep reading.

isnt that a sparrowhawk, not a merlin?