Saturday was a pretty miserable day with constant drizzle but I was on a journey back down to Newcastle with the kids. The weather improved as we travelled on towards Edinburgh where I saw my first Magpie in about 7 months. Back in Geordieland for about 8pm we settled down to watch the Magpies draw with West Brom then I set off back to Scotland. Fond of a treat, I am! I drove past the Icterine Warbler that was found at Fenham Flats by Boulmer Birder but it would have been too dark for me to see it! When I eventually arrived home I went straight to bed.
Today I was back to work - hurray! Got up this morning and it looked like this..... 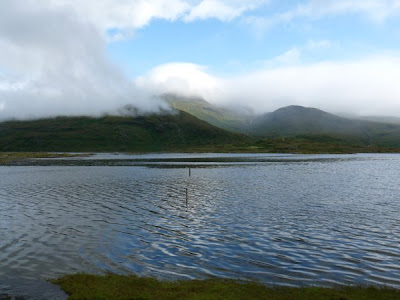 Blue sky, low cloud and some rain all in the same place - superb. Looking up the Glen it looked like this........ 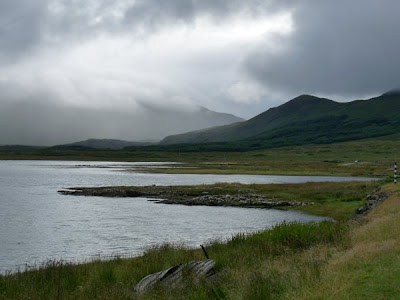 You could see it was going to lift though. We headed off to the starting point at Fidden for Mountain Hare and drew a blank but the small birds made up for the bad hare day. A very smart looking Wheatear sat still for enough time to capture the moment. 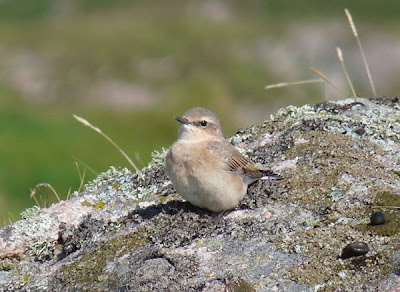 We bagged our first Golden Eagle of the day at the next stop closely followed by a mind blowing sighting of 6 snorkelers in Uisken bay - bother! We did see one of the Wild Goats on the ridgeline which is the first one I've seen for quite a while. The next stop was looking pretty blank until the shout went up for a large bird over there (close your eyes and imaging the finger pointing skywards) - White-tailed Eagle. We watched the bird circling around for a good while then I turned around to check the ridge behind us to find a bird of prey hanging in the wind with tail spread - Buzzard? It didn't look right for a Buzzard and then it banked away to reveal it's true self - Golden Eagle. Another performance was enjoyed and the WT was still there too. I finally remembered I had a camera but it was getting distant by then. 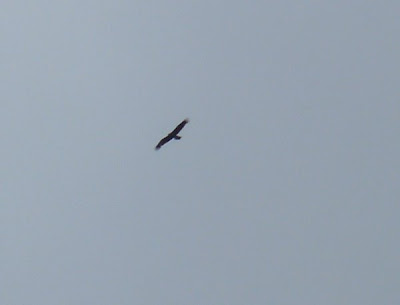 We bagged another 2 Goldies at lunchtime by which time every raptor we saw was going to be an eagle! A Sparrowhawk escaped the big bird discussion as it flashed across in front of us before landing in a well leafed tree so we couldn't see it. We did manage to get an Adder but it was hard work trying to spot it. No sign of any Otters up to now and it wasn't looking good. Seven Greenshank, seven Dunlin and a Redshank were nice to see and the Curlew flock seems to be building up. No sign of any WT Eagle at the nest site but we got some cracking views of another 2 Golden Eagles. I picked one up cruising the ridge just before it landed beside it's mate. I took a photo through the scope with everything on full power in a howling wind - not a bad result considering! 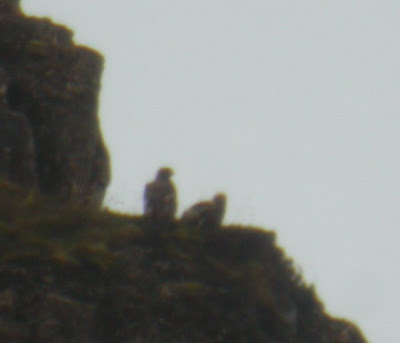 We moved closer to where they were sitting but they were off again giving fine views before dropping behind the ridge so we moved further down the road. I could hear a bit of a commotion when we got out of the motor and quickly picked up one of the Goldies being mobbed by a Buzzard - the coolest thing was I was looking down on the bird! Two Ravens joined the melee and the Eagle shrugged them off and effortlessly gained height before being joined by the second bird. It an awesome sighting for everyone. We headed back for some Otter hunting that failed miserably but I guess we had all the luck with the eagles. A juv Buzzard was a bit of a distraction, sitting on a rock, squawking away and following it's parent whenever it appeared - what a racket though and not a bad first day back! 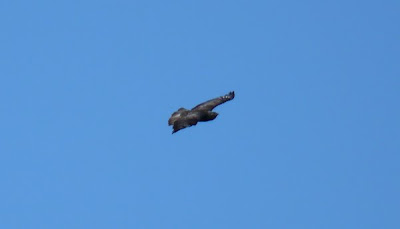