Monday was another cracker of a day full of sunshine. As I've mentioned before every day is different and presents it's own opportunities and challenges. A Curlew playing sentinel for it's youngsters was a beautiful sight, standing proud on a mound with a stunning backdrop of blue sea and craggy shoreline - breathtaking! This Common Snipe was lurking under a bridge, feeding in the soft mud. Not a view for checking out the intricate plumage but an evocative moment in the day. It's always worth checking the nooks and crannies. 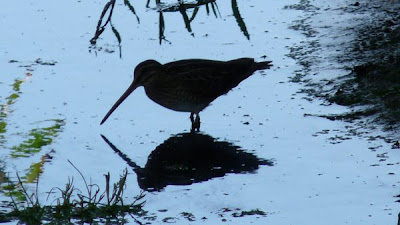 Another golden opportunity was this Common Buzzard perched atop the war memorial just outside Bunessan - this bird (or another?) was still sitting there when we passed by 5 hours later! 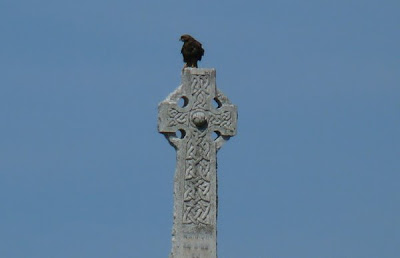 Not quite golden this one but Yellowhammers are one of the most stunning birds you can see in the countryside, brightly coloured and often described as 'it looked like a Budgie', always after some food 'a little-bit-of-bread and no cheeeese' you hear him call. 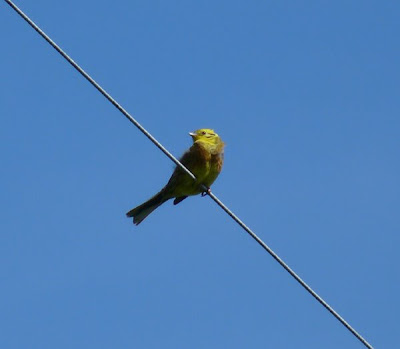 With the previous night's rain there was little chance of getting Adders so we dipped out on that one but the Golden ringed Dragonflies are out in force hunting down anything that flies and defending territories. It was no surprise to watch one catch some prey and then land to enjoy the meal. 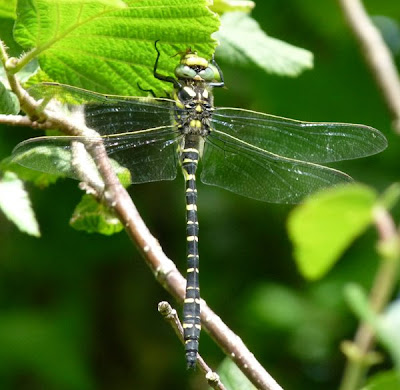 It was difficult to see what this beast was eating but I managed a half decent shot of the prey item in the shade - it looks to be a Wasp so obviously team colours count for nothing in the wild! 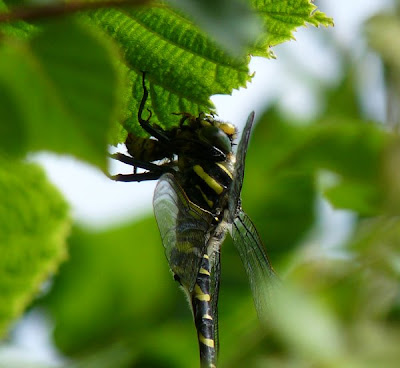 We bagged a Golden Eagle patrolling the ridge soon after lunch and then a WT Eagle doing the same while we watched the antics at the Seal colony. Otters were being elusive but hopes were still high as we approached the hot spots for these shy creatures. We drove slowly round the loch, stopping occasionally to scan larger areas, all to no avail but a second trip around might yield something. We took a break at the WT Eagle nest sight and watched as the young Eagle was making it's first journey out of the nest - not fledged just yet but 'branching'. A good sign that the bird is nearing the time to leave the nest properly and explore the wider world. Another drive round the loch still didn't produce any Otters and it was the same for everyone else. It was good to see that other people were as perplexed as me at the lack of action.
Tuesday started off with a bit of drizzle but the forecast was for it to continue. Four WT Eagle started the day well with the female on the nest with the adventurous youngster out on a limb and the male bird was sitting close by. When the male took off, just after we'd been enjoying views of a Crossbill, I wasn't surprised to see there were two birds flying. The male was off with a female bird but it wasn't the adult as the tail was dark, a young female from last year. The curiosity of the young birds is amazing. They seem to be willing the young birds out of the nest, a reassurance that they won't be alone when they do leave. Fantastic to watch all the same. A Whinchat posed very nicely on a roadside fence until the camera came out and it went all shy. 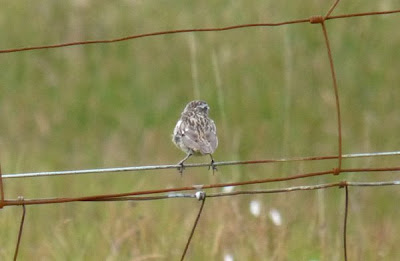 The species list was building quite nicely but a purple patch wasn't too far away. We bagged a couple of Adders with one performing very well as it made it's escape around our feet rather than heading off in the opposite direction. An impromptu stop to scan the loch panned out very well with a great haul of partially unexpected birds. Five RT Diver was a good start, 30 Manx Shearwater cruising around, 10 Eider with about the same number of Razorbill, a single Black Guillemot and a cracking male Common Scoter! With the sea looking flat calm we moved on to see if we could improve the seabird list. About 300 Manxies were gathered in offshore in 5 tight packs. One of these groups exploded into action as a couple of Porpoise started feeding. We all came away smiling from that one. We travelled onwards wondering what we would see next. On an inland loch we located a lone Swan but it was too far away to ID so we headed closer to it. Another fortuitous decision - it turned out to be a Mute Swan but the closest bird to us was yet another Red-throated Diver! The view through the scope was stunning and none of the photos do it justice. It was just too far away for the Lumix..... 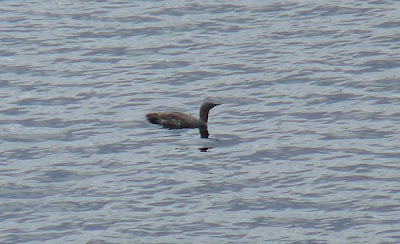 ......and the heat haze off the bracken put paid to any chance of a good digiscoped shot. 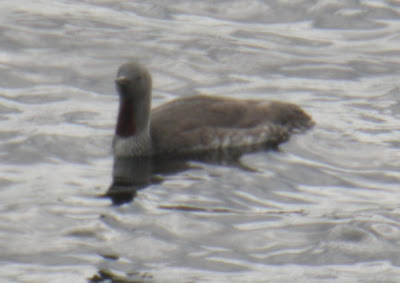 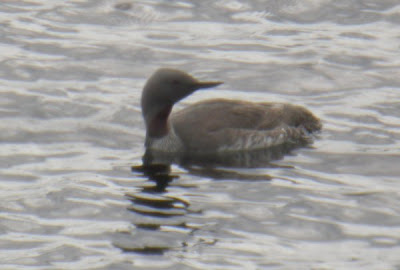 There wasn't going to be any chance of topping what we had already seen but we were happy enough with the day. A couple of Snipe, lots of Greenfinch, Stonechat, Mountain Hare, the list goes on. Wrens are birds that you hear a lot but can be tricky to see on a day out. One of our smallest birds but the loudest voice - here's one giving it six-nowt! 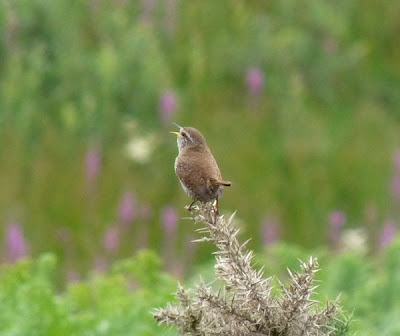 Another day that was classed as an inspiration to get out in the field and have some fun. It's good for your soul, man!
Posted by Bryan Rains at 08:06