How to make an entrance...

Thursday was a decent day with a cool breeze blowing but it was an eagle day too. We picked up some showy waders and a couple of Mountain Hare to start the day off. The Redshank are always the bravest of the bunch but the Common Snipe were out in force displaying. 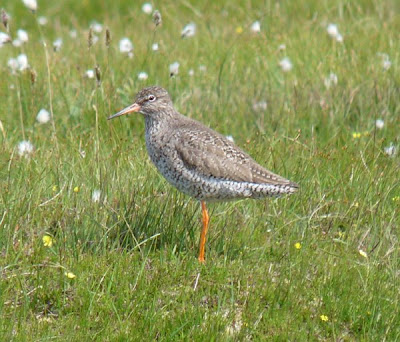 We set off on an eagle extravaganza next - you never know what you are going to get but this was a bit of a treat. Two Golden Eagle on one side of the road and one on the other with Whinchat and Sedge Warbler vying for attention too. The next stop produced another Golden Eagle plus good views of 2 Adders. We needed a rest after all that but we had to press on. A lone female Crossbill was quiet showy at the top of a tree just before we picked up another Golden Eagle! Strange how we hadn't picked up a WT Eagle with all the activity but they would get their turn too. We arrived at the nest site just in time to see the female take flight so we watched her soar around until she cleared the ridge and disappeared.
Friday was a bit of a different day as most of the guests had already been out with me earlier in the week. The weather was good but chilly in the wind. They decided that they wanted to run the show and have something different too. It started well with the WT Eagle and a bit of a search for Golden Eagle and Peregrine but they were not playing fair. We headed off in the opposite direction picking up an Otter very briefly before getting another one asleep on the seaweed. He gave a bit of a shuffle round but he wasn't going to wake up! Two Golden Eagles soaring around at some height were a bit frustrating. A cracking Red Deer stag, in velvet, at the roadside was worth a snap or two. 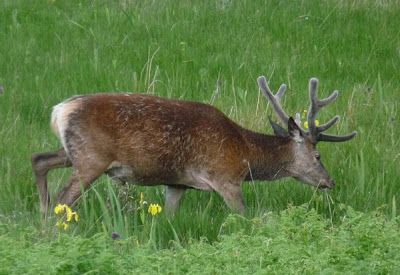 The title for this blog entry is the lead in to the next part of the day....read on. There were certain folk that wanted to spend a bit of time watching Golden Eagle so we went somewhere different. On arrival all was quiet so we wandered off to get a better viewpoint of the area. While scanning around I picked up a small flock of Lapwing that had got up in alarm so I got everyone focused in the right direction. Initial expectation was to see a Hen Harrier clear the rise but nothing prepared us for what really happened. The Lapwings wheeled around then a cloud of other birds appeared just before this monstrous bird cleared the rise and burst through the scattering birds - GOLDEN EAGLE!!! real close too! One lady was in tears it was that exciting. It gained height at a rapid rate being mobbed by a Raven before being joined by last years youngster. It was good to see the juvenile plumage bird as a comparison with the brilliant white patches on the wings and tail.
I called for a bit of peace and quiet in case someone had a heart attack and we headed for a beach - what a way to calm down though. Ease yourself into the scene below..... 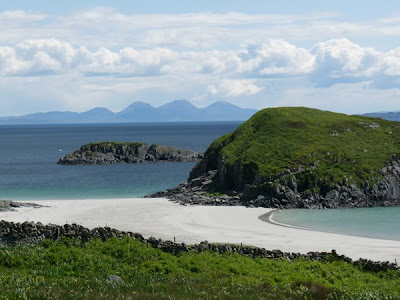 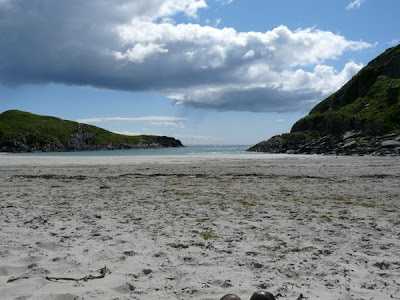 There now, it doesn't get any better than that.
Yet another day of good weather today and it was a more of the same kind of day but with flowers. Eagles of both varieties were bagged early on and we spent some time looking at and smelling the flowers available. This Fragrant Orchid was just starting to flower and the smell was only just there - soon enough it will do 'like it says on the tin' as they say.