Tuesday was a seriously hot day - it looked good for everything but as you know the hot ones keep things quiet. We started down at Fidden with superb views of the Redshank with the youngsters wandering round too. The Stonechat and Whinchat that are nesting close to each other performed very well while a Golden Eagle gave brief views over the ridge. Spectacular views of Golden Eagle at lunch stopped us from eating for about 20 minutes - no complaints there! It was too hot for the Adders to lie out but we did get a Slow Worm. I managed to get onto a Peregrine outside the shop but it was too distant and against the land for anyone else to pick up. While we were watching the WT Eagles we picked up 2 Swifts and a cracking male Bullfinch and another 2 Golden Eagle. Biggest miss of the day were the Otters. We bumped into a few of the other tour operators who all said the same thing - it's too hot for them to be out. Small consolation were 2 Northern Wheatear fledglings. A great explorer getting his first views of the big, bad world. 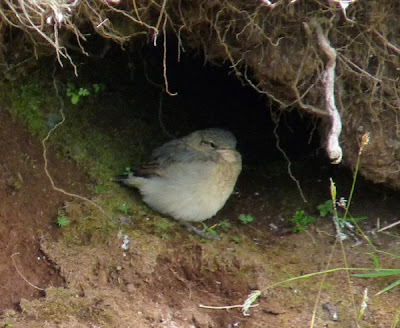 Tuesday started off with a bit of rain and cooler conditions but a stiff breeze that was creating white horses on the lochs. I took some snaps of Ragged Robin that was blowing in the wind but nothing that was worth keeping hence the rubbish cropped shot below. I'll get a better one soon! 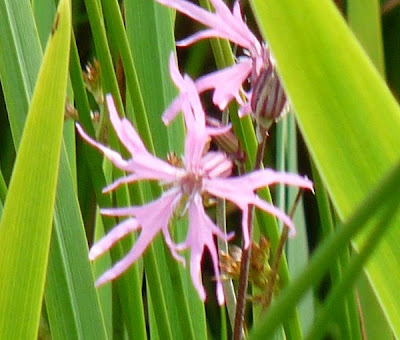 The cooler conditions encouraged the Snipe to get up and display. Watching these birds diving down with the tail feathers spread and hearing the 'drumming' effect is just fantastic! A female Hen Harrier performed reasonably well in poor conditions. It was a challenge to keep it in sight as it made it's way along the hillside in the rain but everyone got to see it eventually. The guests were not confident that we would see Adders on a cool day but we managed to get two - result! Another challenge for the day was trying to get onto a Red-throated Diver that was close to the shore but in very choppy conditions. Surprisingly difficult to see but stunning when you found it. The young WT Eagle is preparing for the great outdoors by waddling around the nest, exploring his small world. The chick is as big as the adults now and very impressive when it flaps it's wings but it's got to be careful. We watched as the youngster stood tall and nearly toppled over backwards - another lesson learned no doubt!
Yesterday was forecast to be wet all day so it was a treat to find a clear spot when we started. Two Mountain Hares gave good views running about in the fields. This Meadow Pipit is feeding young close to one of the stopping points and usually tries to move us on so we give the bird plenty of room and move on quickly. 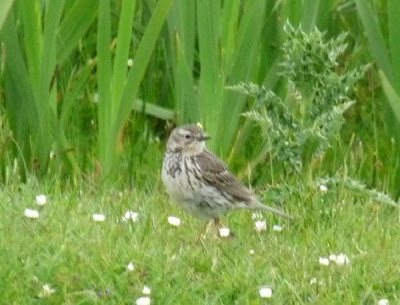 The windier conditions always gets the birds moving on the sea. Gannets are always out there and are spectacular to watch as they dive into the sea like great, white arrows. We located a couple of Fulmars passing by while looking out to sea - not a common sight for me. A female Hen Harrier was out hunting as we made our way back up the road from Uisken beach. Lunch was a challenging affair as we could see the rain approaching. A quick look for Adders before the rain started only produced a single Common Lizard but it was off before anyone else got to see it. We took shelter from the rain, had lunch and waited for the sun to come out. We went to look for the Lizard again and scored with the wee beastie sunning itself on the same rock it was on earlier. 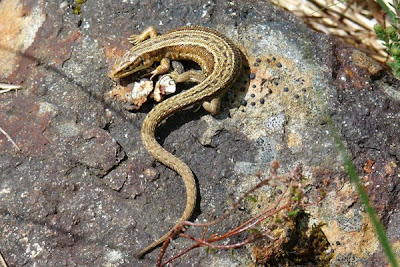 Two Adders were seen but again they were disturbed and off like a shot. We gave it a bit of time and approached the area quietly to see one of the Adders slithering through the grass before disappearing. Two Common Crossbill flying over, calling, chip chip chip as they went on their merry way. The dodgy looking Greenshank is still in attendance outside the shop but it was partially obscured. Three Otters were a real treat today. A mother with two cubs. The cubs are going in for the wrestling championship as they are constantly rolling about and chasing each other. Another grand day out though with more to come today!
Posted by Bryan Rains at 09:04