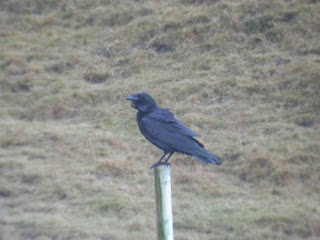 I decided to have a look on Loch na Keal today to see if I could catch up with the Glaucous Gull. First decent bird of the day was this Raven. Normally they'll fly off as soon as you point something at them but this one was quite obliging. It was a calm day today so the Loch was like glass making it easy to pick out the birds and beasties. A couple of GN Diver, Black Guillemot, Barnacle Goose were all added to the list. At the head of the Loch there is usually an abundance of birds. A couple of BT Diver were calling to each other as they were preening with 2 GN Diver drifting past in the background. At least 6 Slavonian Grebe were out there too but too distant for any shots. They never seem to stop feeding either! 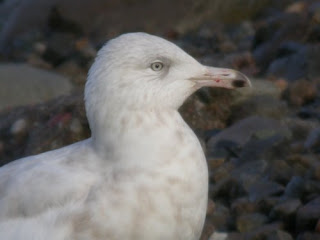 Next thing to check was the outfall from the hatchery. A quick check through and there was the Glaucous Gull. A distant view but I'd caught up with a bird I didn't see last year. This chap had a very lucky escape a few days ago. The resident pair of WT Eagle are very partial to the odd gull and he was almost on the menu. There are some quite dramatic shots on Mullbirds website. As you can see he is alive and well for now but I do wonder if he'll be targeted again. A walk down to the shore to get the shots produced some nice views of Teal, Redshank, Goldeneye, RB Merg and Buzzard.
A drive to the campsite a bit further round the Loch produced 3 Bar-tailed Godwit, 23 Ringed Plover, 2 Turnstone a soaring Golden Eagle and an Otter.