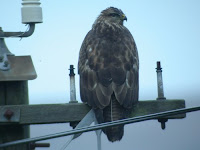 Got up this morning and wandered outside to look at the view, it was still there and still pretty! One of the local Hoodies (Hooded Crow and not a teenage ASBOphile) was making a racket down on the shore. I had to have a look to see what he was shouting about....nothing to be seen. The local Buzzard was observing the state of play and begging for his photo to be taken. Not one to upset the locals I duly obliged. I almost had to step back to fit him in the view and it's not turned out too bad considering the shutter speed was 1/8 of a second!! 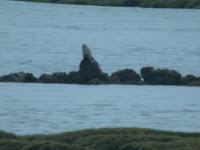 I scanned the rest of the shoreline and found 5 Ringed Plover, 4 Lapwing, 2 Raven, 2 GBB Gull, 5 Redshank and 2 Greenshank. The next thing through the viewfinder was a misshapen piece of wall that promptly stuck it's head up for a scratch! Out with the camera again even though I knew this wouldn't work but you can tell what it is. Took the camera off the scope to have a proper look and there was another Otter fishing just behind this one. Not bad for a quick look before breakfast.

Just thought I'd give an update on the WT Eagle pictures. I've posted a different picture to the earlier post so you can see the differences. Starting from the left the first bird had Yellow tags which means this bird was from 2006. It's bill is completely yellow and should have a white tail by next year. The bird is a female and the adult birds in the photo are the parents of this bird. The next bird is an adult male. The third bird has no wing tags and looking at the bill colouration half yellow, half black indicates a first year bird. Going on size comparison with the first bird this is also a female. I couldn't read the ring on this bird but it could potentially be last years youngster from this pair. The last bird is the adult female. Hope that helps!
Yesterday's post had an adult male bird followed by two first year birds. Again check the bill colouration. 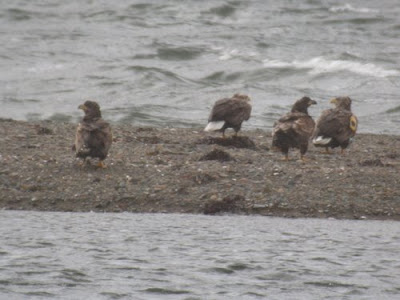 Great shot! I arrived as one took off so only got 3 in my photo - what camera/lens do you use? Love the buzzard photo - I have quite a soft spot for buzzards!

Not a bad selection on your doorstep. Send one of those WT eagles for a holiday down my way.

WF - the equipment used for the photos is a Zeiss 85tfl scope with a nikon 4500 camera attached.
mosstrooper - thanks for dropping by. I'll see if I can smuggle one of the WTE down for you on the next visit!!