Wednesday was a showery day but we managed to stay dry and get plenty of good sightings for the day. Our first sighting was of a Golden Eagle sitting on top of a hill just before a shower came through and killed the visibility plus a couple of Redwing showed well at the side of the road. Our next stop provided views of a few Common Buzzard.... 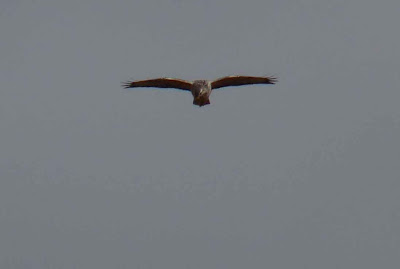 ....12 Greenland White-fronted Goose and two White-tailed Eagle - an excellent start to the day. The weather continued with the showers and kept things a bit quiet but we did have a brief view of Golden Eagle in flight. I thought we could get better views of the Goldie from another location so off we went. As another shower passed through we picked up the Goldie again and got views of the bird being mobbed by Ravens as it stood on the hillside before taking flight and drifting off. Golden Plover, Ringed Plover, RB Merganser and Common Seal were all seen before we finally picked up an Otter. The light was starting to fade as the clouds gathered but the view of the Otter was superb as it swam towards us and finally came ashore to head for the holt. 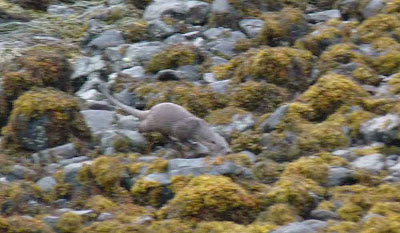 We picked up a couple of WT Eagle in flight when we stopped for an afternoon cuppa and finished the day off with close views of four Red Deer. We did have a nice surprise on the way back as we picked up 3 more Otters near to the road - result.
Thursday was a day off and the weather was pretty poor. Friday I was back on the road again with guests but the forecast wasn't looking too good. The morning started off quite windy with the rain threatening so we had to try and make the best of the day. Before I even set off this WT Eagle drifted over the shop. 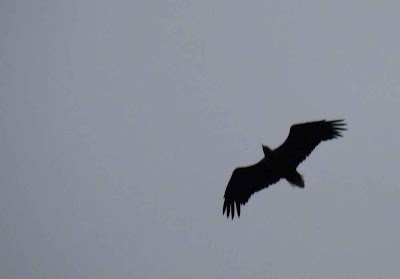 We knew the rain was due to start around 12pm so we made the effort of getting round a few of the Golden Eagle sites but we failed to pick one up. We'd had a bit of a quiet start and as the rain started to fall we wondered if we'd see much more. We'd had the likes of WF Goose, GN Diver, Common Seal etc but it was about time we'd had something special. The rain was getting worse but I spotted something in the water that required a second look. We waited for something to reappear. It seemed to take an age before the small brown head of an Otter broke the surface - at last!

Not just one Otter though as there were three of them! We watched these until they disappeared and then we were lucky enough to find another just after lunch. Another prolonged view but this time we saw the beast out of the water too. Despite the heavy rain we headed off in search of WT Eagle. A quick look around didn't produce anything at first and on our second look I was surprised to find a WT Eagle, in flight, drifting into view!! I watched it land in a tree so headed off for a closer look. 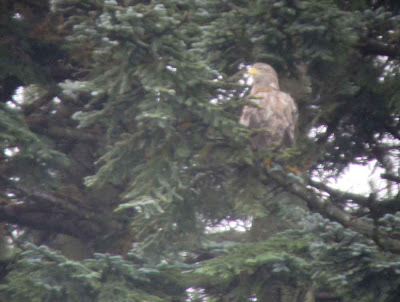 The guests were slightly disappointed that they hadn't seen the bird in flight but that didn't last long as the bird dropped to the ground and then it flew off to the right. 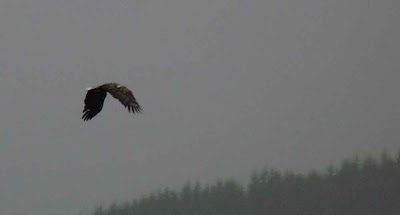 We watched it eat whatever it had picked off the ground before it flew back towards us - who says they don't fly in the rain?! We were soaked by this time so we headed back to the motor to see what else could be found. We picked up another two Otters on the way back. 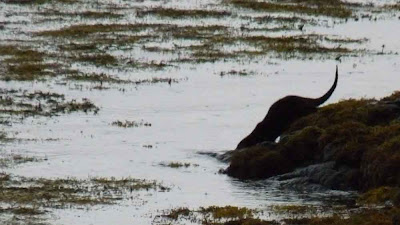 We had Red Deer and a few Common Buzzard that were sitting, dripping wet, on telegraph poles... 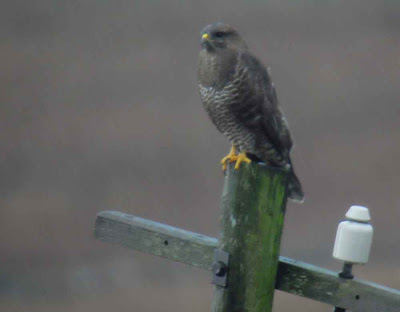 ...and the Common Seals just looked on as we passed by. 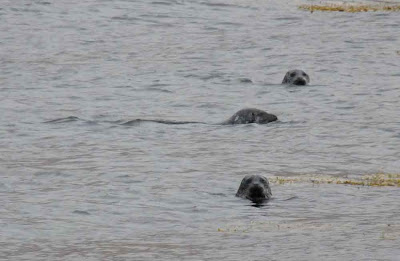 I make no apology for the fuzzy quality of the photos - that's the way the weather is, fuzzy!
Posted by Bryan Rains at 17:16