Friday I had a tour on what looked to be a miserable day. The cloud was low, the wind was blowing, the Otters were still being elusive so it wasn't looking good. Oh but how things can change!! We headed off in search of Mountain Hares. After a quick look round we'd picked up the 27 WF Geese, which I thought had left for Greenland already, cracking views of the Skylarks and Lapwings but no sign of the Hares. So, one last look around and there was the tell tale ginger shape amongst the rocks. With the scope pointed in the right direction it turned out to be two Mountain Hare sitting out of the wind. A bit of a surprise but well searched out so off to the next stop. Five Whooper Swan had landed on a freshwater loch giving good views along with a couple of Tufted Duck. We followed a female Hen Harrier down the road before picking up Reed Bunting and Redwing and then another surprise find were four Mountain Goats.

We had a good comparison between Cormorant and Shag as they were sitting together on the rocks and an obliging Great Northern Diver was in the bay too. 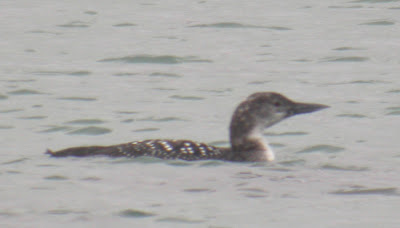 As we moved on a Sparrowhawk had a flock of Rock Doves on full alert taking evading action. The cloud cover wasn't lifting any at this point and I was wondering where we would get Golden Eagle. An Adder was next on the list in misty, cold conditions and then a big result as we picked up a Golden Eagle close to the road. It lifted off and moved out of sight but a flock of Common Gulls were alarm calling and giving us hope the bird was still visible. We walked back down the road to find the Goldie perched up again - fantastic! The next stop was for lunch and just as I was preparing things the gulls started alarm calling again. I stuck my head out from round the back of the motor and there was a WT Eagle flying towards us! Stunning views in the scope too. 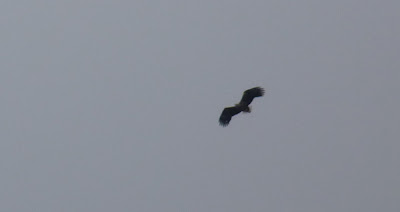 Our luck was certainly in. We finished lunch and moved on to look for Otters. Not five minutes down the road we had a couple of Mute Swan and then I spotted a familiar shape in the water heading for the shore...

...not one Otter but two! Again, stunning views through the scope and they stayed long enough for a few digiscoped shots too. 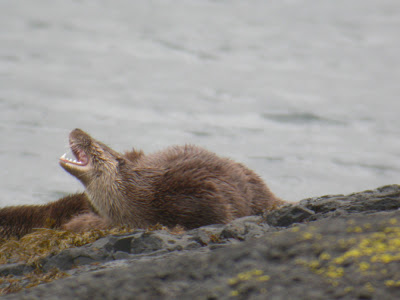 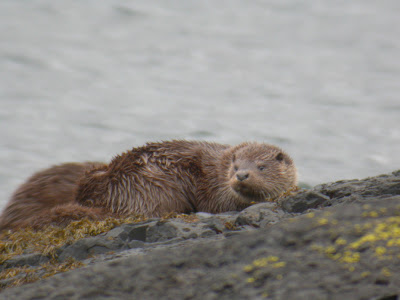 We headed for the WT Eagle nest after that and got both the adult birds and a herd of Red Deer stags were not too far away from there. So despite the weather not looking so good it had been one of those perfect days.
Saturday was a better day all round but I was busy with other things. I had regretted not having the camera to hand when we'd seen the Golden Eagle yesterday but I was surprised to see two birds in the same location today. 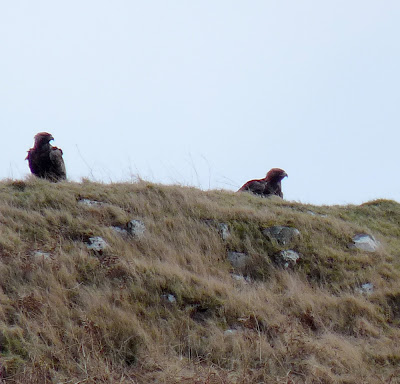 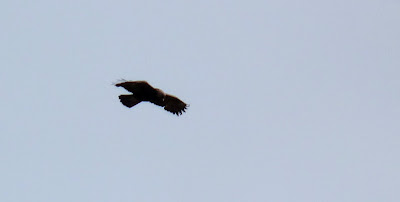 Sunday was Shop Ladys' last day off so we headed off island. The weather was pleasant apart from the odd shower and I was without my binoculars and cameras - guaranteed to see something! As we were heading for home we stopped to look for Otters but it was all a bit choppy to view with the naked eye so were considering moving on when the gulls started alarm calling. They're always quick to pick things up and it was only when the 2 Herring Gulls closest to us started calling that we picked up the reason for the alarm. A Golden Eagle was crossing the head of the loch! It was certainly good to see something like that away from Mull.
Posted by Bryan Rains at 20:34

Think I would call most of your blogs the perfect day