Tuesday was clear and sunny again and I just had a quick run around the loch. While scanning for Otters these four Goosander appeared from the near shore. Not the best of shots but it's nice to see the sun catching the plumage and showing how green the males head is.

Next on the list was the flock of 21 RB Mergs that were initially quite far out but they drifted inshore and started bathing and displaying. 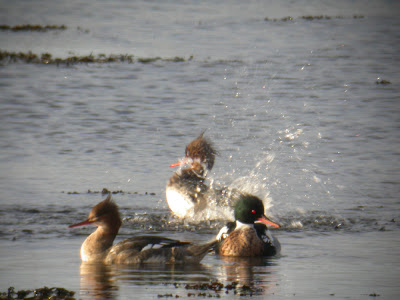 It was superb to just listen to the noise of these birds splashing about and watch the males stretching their necks up in displays for the females. I left them in peace and cracked on with the drive. I found an Oystercatcher enjoying the warmth of the sunshine and he didn't seem to be bothered about me turning up next to him so I crept out to take a few shots.... 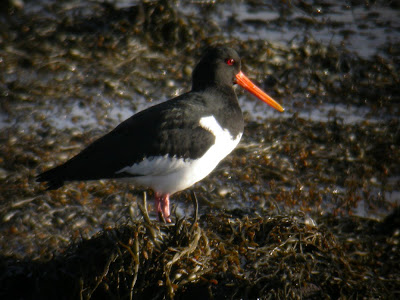 ....and then I heard a splash in the water. The sun was blazing on the sea and I couldn't see a thing until the splasher hauled out onto the rocks.

It was the mum and two cubs searching out breakfast. I followed them along the shore and watched them haul out again. It was a chance to get better light on them.

I spent some time trying to take a photo with the mobile, so I could send it to my daughter for her birthday. It worked eventually! As I returned to the motor a Buzzard was wheeling around and looked good with the light catching the underwings. 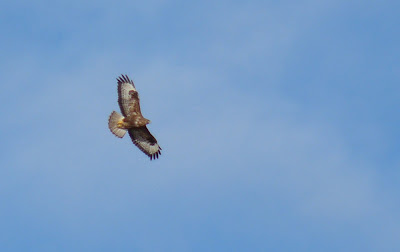 I moved off into the forestry next to see what was about. The Siskin were giving good views as they performed flight displays and 3 Crossbills bounced around in the same trees. I could hear a Great Spotted Woodpecker drumming in the distance but it wasn't coming any closer. I headed back along the way and gave the loch a quick scan picking up a single BT Diver and four GN Diver all well out. A Golden Eagle cleared the ridge briefly before dropping back down just before I arrived back to base.
Wednesday the fine weather continued so I headed back out. With it being dry for a few days I made the effort to try and locate a Dipper on the river while the water is low. I checked various stretches of water with no birds to see but the odd dropping on the rocks told me there was still a chance. At the next stretch of water I was scanning downstream when a bird appeared from behind me and flew down the river. I'd got my Dipper (97 for the year list) but it kept on flying and dropped into a spot that wasn't visible from anywhere. I wandered up to a high point to scan about. Beautiful views but the sky was empty apart from a flock of twenty Meadow Pipits that I disturbed and a couple of Raven 'kronking' their displeasure at my invasion of their land.

As I wandered back down I found another Adder basking in the sun... 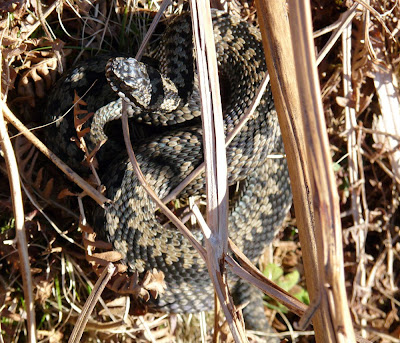 ...and some strange ice formations on the path. The ice crystals had grown vertically for about 2 inches - very odd. 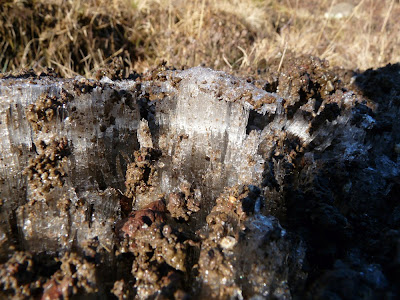 The loch was flat calm so I had a good scan around and found at least 20 GN Diver, 2 BT Diver, 3 RT Diver and 5 Common Guillemot - not a bad haul. There doesn't seem to be a great deal of activity outside the shop at the moment so I was pleased to find 3 Turnstones quietly picking away. I've had 5 Golden Plover out there and a few Ringed Plover but they seem to be feeding in the channels rather than coming out in the open. I'm sure things will start getting a bit busier soon. Nearly forgot about this Buzzard..... 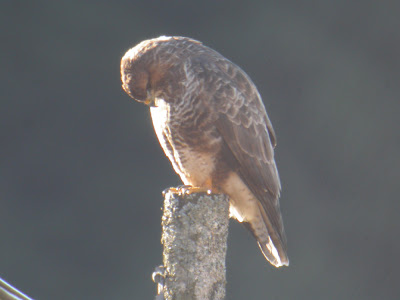