There's not much been done over the last couple of days as the weather has been a bit poor. Full cloud cover and a howling wind making it feel colder than it was when the snow was here! I thought I'd better do one more posting before I do some essential maintenance, mental cleansing, holiday, whatever you want to call it. Either way there won't be another posting until next week sometime.
The morning disappeared in a flurry of activity for which I have little to show. While waiting for one of the deliveries to arrive I spotted David Lindo (The Urban Birder) across the other side of the loch. 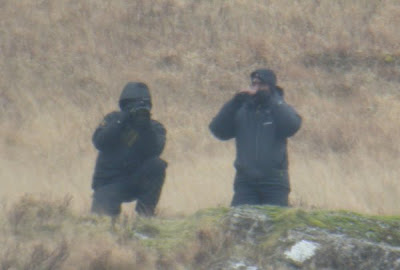 He's over here doing an article for the RSPB magazine, Birds. Let's hope I don't get a mention as some kind of wildlife curtain twitcher! Enough of that. There was very little on offer this afternoon but I wasn't expecting much either. A dozen GN Diver were keeping fairly distant as were the RB Mergs. The Rock Pipits seem to be making their way back to the shore now it's not frozen anymore. As you can see from the Grey Heron photo the light conditions were pretty poor to say the least. 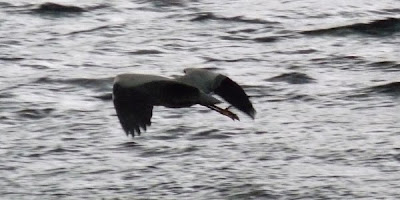 The landscape picture makes it look a lot brighter though. 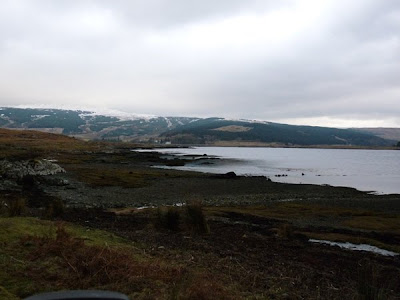 I checked a few of the ditches and wet areas on my travels but no sign of any Snipe or Woodcock. Hopefully they have survived to move into better areas for feeding. The best sighting of the afternoon was to see the Golden Plover and Lapwing together in the fields. There were 10 Golden Plover and eight Lapwing along with 12 Starling and a single Fieldfare. I was busy trying to get a photograph when one of the Goldies called in alarm and they all took off except this one which just hit the deck and the Fieldfare stood to attention. 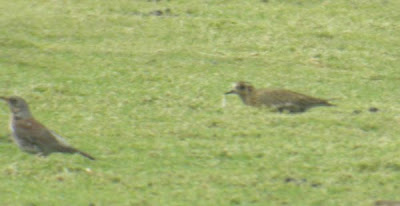 The birds were silent as they flew over my head but the rush of air over their wings was superb. The rapid swish, swish, swish of the Goldies closely followed by the thrumming of the Lapwings - just magic.
Posted by Bryan Rains at 15:26

Hey! mental cleansing eh? That's why half of us come your way in the first place!

Hope all is well