It was good to get back onto Mull on Sunday night and I was keen to get out and see the local wildlife again. Monday was taken up with unpacking, catching up with local folk and blogging - no chance of any birding despite the nice weather!
I was informed that there was a bird club outing on the Tuesday (I'd forgotten!) so I decided to make the effort. A cracking day weatherwise and read on for the wildlife. I set off, with PS, a bit later than I should have so it was a bit of a mad dash through to the head of Loch na Keal. Along the way PS pointed out 4 Red Deer stags on the hillside - we had to stop to look.

Continuing the dash we picked a few Buzzard, Slavonian Grebe, RB Merg, GN Diver all while travelling at speed! We had a brief look over a bridge for Dipper and dipped then another short stop for a few Fallow Deer. We were running late so I couldn't wait for the deer to get it's head up but the Red Deer in the background was keen to show how it should be done! 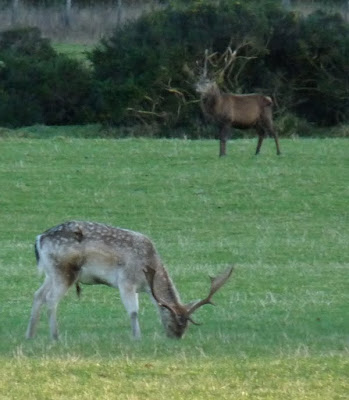 We finally met up with the group of 14 bird club members and set about some non serious birding. There is always plenty of catching up to do in the Winter but there are some sharp eyes in the group too. Nothing startling to start with as the regular Redshank, Curlew, Ringed Plover, Goldeneye, GN Diver and Slav Grebe were all noted along with the absence of any WT Eagle and Iceland Gull! We located Song and Mistle Thrush, Blackbird, Robin, Greylag Goose but no sign of Fieldfare or Redwing - you can probably tell what we were starting to think! Off to the bridge for the Dipper and at last we connect with a target bird. 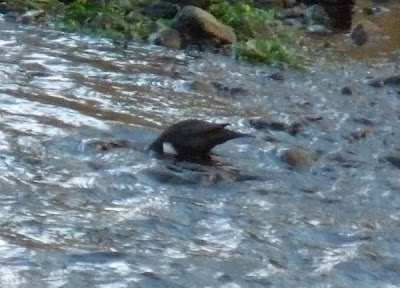 A coffee stop next to give us time to view the loch and scan the ridges. Three GN Divers, 1 RT Diver, 5 Slavonian Grebe and 2 Golden Eagles were winkled out in our short break. Another stop halfway down the loch got us an even closer view of a juv GN Diver with what looked like a Rock Goby in it's beak. I missed that bit with the camera but I did get a snap of the bird.

Another two Golden Eagle cruising the ridge behind us added to the interest before we moved along to the lunch spot. We picked up our first Buzzards along the way as we disturbed them from their perches on the rocks at the side of the road. We had a sheltered spot for lunch and with the sun shining on us it was very pleasant. We had about 140 Barnacle Geese grazing the grass on an island in front of us and 3 RT Divers and 5 Black Guillemot on the sea in between. A lone male Eider duck was a nice find for the day too. A female Stonechat was doing it's best to mind it's own business while a territorial Robin tried to chase it off. 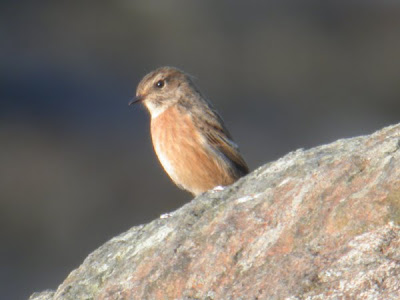 An Oystercatcher provided a photo opportunity as it stood on the rocks just behind the warring chats. 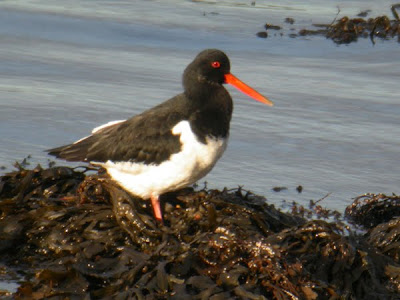 A couple of Hooded Crow were arguing the toss behind us before one of them decided to come down and investigate what we were doing. The Hoodie floated above us giving a superb aerial display before settling in front of us and proceeded to pretend we weren't there. 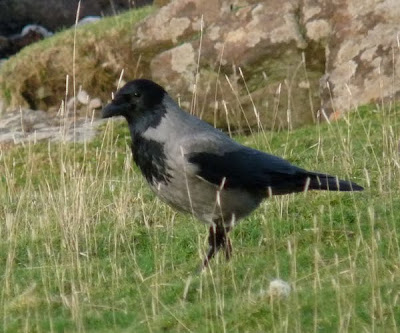 We headed through the glen to Loch Scridain where we picked up a distant Black-throated Diver. A closer look was required so we travelled on to get cracking views of the bird as it was fishing. Two Crossbills called as we were leaving the diver but they were quickly out of sight. A lone Otter on the seaweed was a welcome find as we neared the end of the day. More Ringed Plover, a single Greenshank, Lapwing and Dunlin, two Little Grebe, 4 Turnstone were picked up along the way. Another two Golden Eagle and two more Otter completed a difficult day.
I did have a plan to go out today but the weather was drizzly this morning so I ended up with chores instead. A singing Common Crossbill at the back of the shop and a Golden Eagle sitting on the ridge was the best I got today - let's hope for a good one tomorrow with a WT Eagle!
Posted by Bryan Rains at 15:34