Thursday was a good day with the weather but not too grand with the sightings. The best we could do for WT Eagle was a distant white tagged individual at some distance. We headed off to look for Golden Eagle and Otter - no sign of any Otters but we did get 2 Golden Eagle but it was still hard work. It had to improve soon! Another look for an Otter with the tide well out and plenty of seaweed covered rocks to sleep on it could be a hard task. The sun was beating down and creating a fair bit of heat haze when I found something that didn't look right. Zooming in on the mystery object I could see it was the wrong texture for seaweed - an Otter at last. We waited for about ten minutes before it eventually stirred and we could see it for what it really was! We headed off to lunch and had just broken out the sandwiches when a Golden Eagle flew straight overhead. I managed to get the camera on it eventually but it was an awesome sight at close quarters. 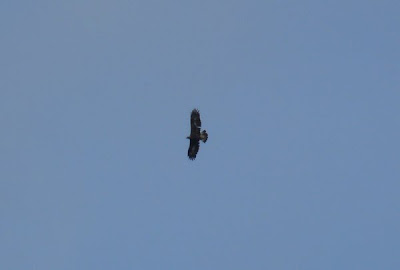 We lost sight of the bird before too long but relocated it flying with another bird. Not a great deal else to report from the day with the regular birds performing as usual but there does seem to be an increase in the number of Stonechats around. Here is a photo of a strange effect you occasionally get when the sun starts dipping towards the horizon. 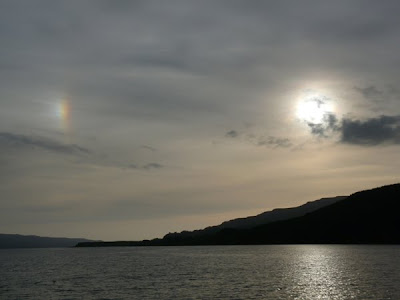 Friday wasn't too bad a day either. A real bad start with nothing of interest to show but Red Deer after a couple of hours. Two Golden Eagle over the ridges brightened things up no end before we bagged an impressive selection of shorebirds including the Golden Plover, Dunlin, Turnstone, Ringed Plover etc plus a single Wigeon. Just around the corner an adult WT Eagle was sitting on the rocks being harassed by 3 Hooded Crow. The Hoodies were using the usual tactics of one bird behind and the other two in front of the eagle and trying to drive it off - great to watch. 3 Golden Eagle gave reasonable views at lunchtime but the 2 Bullfinch and a charm of 20 Goldfinches stole the show. We'd had no sign of Otters up to now and it was looking desperate when we made a stop at an inlet - no sign of anything. Out with the scope to check the rocks seemed like an attempt too far but it wasn't long before I spotted an Otter rolling about - result. It was the first time I'd seen an Otter out of the water in this spot but the delight doubled when I found another one in the water! Never seen two Otters at the same time here either. We had a great finish to the day with superb views of Stonechat, Reed Bunting, a flock of 15 Skylark, 30 Linnet, a Common Snipe and a female Hen Harrier. I finally managed to get a reasonable shot of a juv Rook - these birds get reported as Carrion Crow just about every year as they have the feathering over the bill. 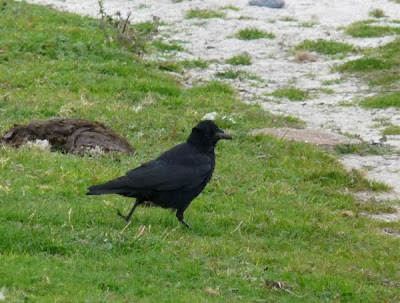 Despite the windy conditions we still picked up 2 Mountain Hares too. A cracking day out despite the shaky start!
I had the weekend off for a birthday treat staying at Tiroran House - just round the corner from a WT Eagle site. Saturday we were up early for a stroll in the gardens and it proved fortuitous as a WT Eagle made three passes over the area while we were out. With friends to take around the island and show off the specialities we were hoping for good weather but the rain came lashing in early on. The forecast said it would clear by 11:30 and thankfully they were right. We looked around for things for the first hour we were out with nothing much showing. The wind had changed direction so I thought we should check a regular spot for WT Eagle in poor weather. Result - one adult bird perched up waiting for the rain to stop. The weather was clearing nicely so we followed it through. Another WT Eagle in flight, a juv this time, was a bonus before we picked up a Golden Eagle coming round the side of a Ben. We tracked this bird below the ridge until it joined with another two birds. We headed off for coffee and a chat before we continued on our journey taking in some of the scenic beauty of Mull. Another two adult WT Eagle kept up the wildlife theme and a few tales of times past and historical sights filled the gaps. A Buzzard doing it's thing looked like a good photo opportunity as we travelled along. 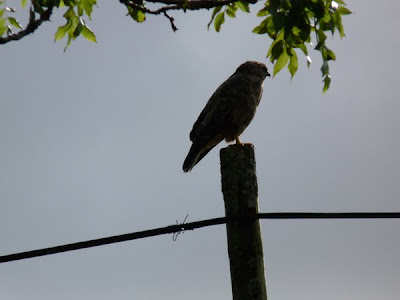 We had one last chance to bag an Otter before the day was done but there didn't seem to be any sign. I had to try with the scope just in case we'd overlooked anything. The tiniest piece of fur was sticking up from behind a rock and we could easily have driven off without seeing it. The fur came to life and a head popped up before settling down again. Another furry body appeared too - it was a mother and cub together. We moved to a better position to get better views before heading off for a celebratory pint!!
Sunday we were due to attend the WT Eagle fledging party at Loch Frisa. With two birds satellite tagged this year and one of them being named Oran after St Orans Well I'd taken some photos of it in the grounds of Tiroran House. 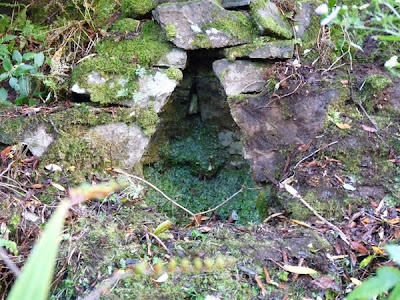 We arrived at the hide at Frisa to find decent weather but no birds and then the rain came in to try to spoil things. It was a quiet afternoon but the highlights were a hunting male Hen Harrier that landed in a field near to the hide.... 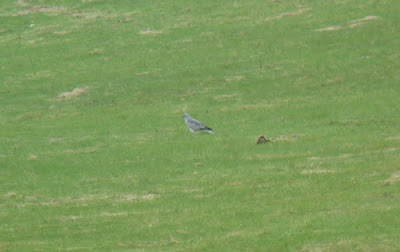 ....and a pair of Golden Eagles that seemed intent on giving a Raven a heart attack. They certainly didn't attempt to kill it but they did frighten the living daylights out of it - a fantastic sight that had everyone gasping. 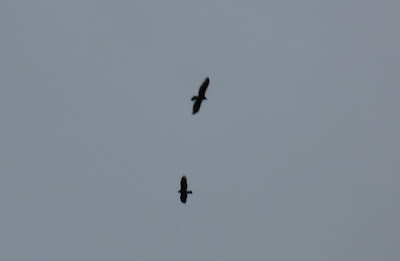 Shame about the weather for the fledge party, I know Dave & Debbie were hoping for the best